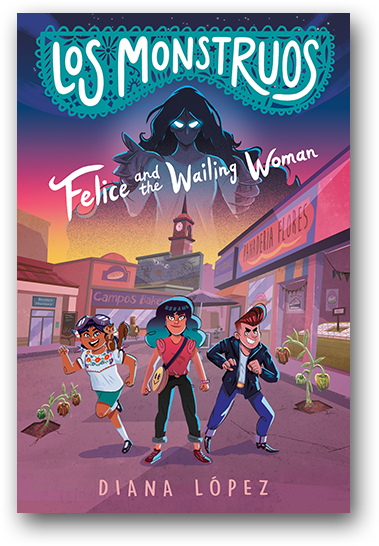 The first in a series, Felice and the Wailing Woman brims with high stakes adventure, Mexican folklore, and a dash of magic that will have you staying up all night to finish reading. Diana López reframes lore with a positive feminist representation of the La Llorona myth, a perfect conversation starter for book clubs and classrooms.

When twelve-year old Felice learns that she's the daughter of La Llorona, she stows away and lands in the magical town of Tres Leches, where her mother is said to be haunting the river. Growing up with her uncle Clem in Corpus Christi, Felice knew that she had been rescued from drowning—it's where her intense fear of water comes from—but she had no idea her mother remained trapped between worlds, looking for her. Guided by the town's eccentric mayor, Felice vows to help her mother make peace with events that have turned her into the most famous monstruo of US-Mexico border lore. Along the way, she meets the children of other monstruos—like La Lechuza and The Dancing Devil—and together, they free Tres Leches from magical and metaphorical curses that have haunted them all for generations.