A Story about Music, Shoes, and Family 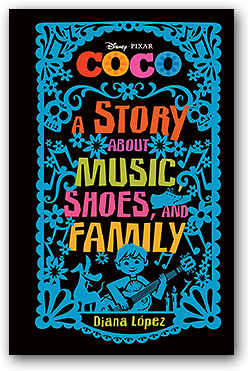 Sometimes Miguel thinks he's cursed. For generations, the Riveras have banned music from their home because of a terrible betrayal, focusing instead on their successful shoemaking shop. Miguel's abuelita, his parents, and his tios and tias all want him to join the family shoe business. And yet Miguel has a secret dream—he longs to play guitar, just like his idol Ernesto de la Cruz.

But when a mysterious chain of events leads him to the stunning and colorful Land of the Dead, Miguel finds there may be a way to become a musician and get his family's blessing. Soon he meets a charming trickster Hector, and together they set off on an extraordinary journey to unlock the real story behind Miguel's family history. But will they learn the truth before Miguel is stuck in the Land of the Dead for good?

Learn how Diana adapted Coco from the Pixar movie

Discussion guide for Coco, A Story about Music, Shoes, and Family

Praise for the film

"Of every Pixar film that deals with family, memory, and loss, ask, 'Is there sufficient reason for the tears that will inevitably run down my face by the end?' Yes, thanks in no small part to the ingenious use of De La Cruz's hit song, 'Remember Me.'"
—Matthew Lickona, San Diego Reader

"None of Coco's few flaws can fatally undermine the film because it is, most of all, a smart and enduring piece of storytelling with a satisfyingly twisting narrative and richly complex theme."
—Kate Taylor, Globe and Mail